The bike is heavy, and I'm utterly shattered. I don't even have the excuse of having been out for a long ride, or a particularly challenging climb.

It's not my bike.

I've got a bike, you can ride it if you like

I've just dropped Josh off at Aikido, which is one of his new favourite things. His gi was there waiting for him when we arrived, and that seemed to top off what had already been a pretty great morning.

So here I am, heading back home carrying Josh's shiny BMX under my arm. It's too small to comfortably push along, as I have to stoop ever-so-slightly in order to reach down to the handlebars, so I've grabbed it by the seat tube and am trying not to think about the torque this is probably exerting on my spine.

As I said, his bike is heavy. Heavier than mine, now I come to think about it.

It occurs to me that this is only one of a handful of times I have carried it. Despite it coming up for three years since he got the bike for his birthday, this was only the third time he'd been out on it.

We were struggling for cash around Josh's fifth birthday. Bad planning had led to us with a couple of larger-than-expected bills that we just couldn't pay. Relatives stepped in and bailed us out, but we were still paying them off, and didn't really have much left over for presents.

Then Anisa realised that she'd been saving Tesco Clubcard points for literally years. We did the sums and realised that, if she turned them into vouchers, we could get Josh a bike for £8.

I think we were so happy we cried.

Josh's birthday rolled around, and he knew things were tight. He was probably expecting a pat on the back and a box of sweets by the time he wandered through to the front room. I suspect he thought he was still asleep when he spotted the bike with a ribbon on it. 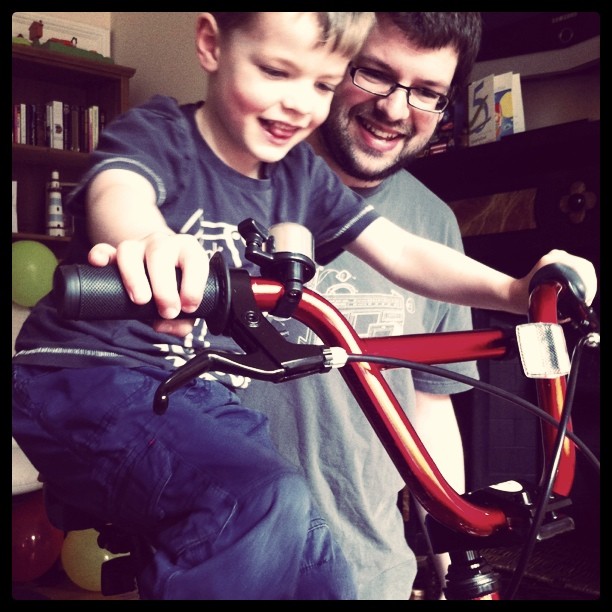 We had a party planned for that day, and we never got around to taking his bike out for the first time.

A week went by. A month.

Despite best intentions, I caved in and bought some training wheels.

Another week went by. I tried to fit the training wheels and nearly took off my fingers when trying to remove the locking nut. That wasn't happening.

I was glad about that, in a way. I'd always resented the fact I'd had to learn to cycle with training wheels. It was just what you did when I was a kid, but it took me a hell of a long time to take them off. I still remember that day when my dad first took me out without them on.

It was a dreich day, and we headed to the parkland behind our house. Grass as far as the eye could see, and we spent the afternoon with him holding the saddle and me pedalling as hard as I could. Cheesy as it is, I remember my pleas of "Don't let go Dad! DON'T LET GO!" as my legs hammered on the pedals, only to turn around and realise he was a hundred yards behind, whooping and clapping and cheering me on.

I don't think I've ever felt such a moment of pure achievement since. Well, up until Sunday just gone.

After an abortive session last year, I determined that I was going to stop being such a coward about the bike. Both Josh and I have them. Both of them have been sitting outside our flat accruing dust instead of dents.

This had to change. So out we went.

The first few attempts were rough, but before I knew it, there I was, whooping and hollering like a madman as Josh shouts back "I'M DOING IT, DAD!", cycling around the park like he was born on a bike.

And right then, I fight back tears. Because I get it, I suddenly get it. This isn't about him, about the bike being "too heavy" for him, about me being worried that he'll fall or hurt himself or get upset if he fails: it's about me. It's about my worries, my own fears of failure.

My fears of failing him.

And I wonder if this is how my dad felt.

A basket, a bell that rings and things to make it look good

I'm cycling to work these days, and already I've started to view the world in a different way. Not in some profound life-changing way, but in a more mundane, distance-measuring way. Riding a bike tends to reduce travelling time to about a quarter when compared to walking. I remember this from the last time I picked up the bike a few years ago.

I'm suddenly looking for excuses to get on the bike. Don't get me wrong: I'm still as unfit as ever, but hopefully that's going to change.

I enjoy cycling. I like the speed, the freedom, even little things like the difference in height compared to walking or driving. I like the fact that this is all mine: everything about moving forward comes from me.

And yeah, I'm still scared of traffic, of riding at night, of taking Josh out on the road, but these fears are manageable.

Because there's something about cycles that lessens the fear.