A quick glance around the room. She's obviously expecting nothing, but it occurs to me that there were a couple of things I was going to bring up. We've covered most of them, but did we cover all of them?

I tap a couple of keys on my keyboard.

"Actually, yeah, sorry: couple of quick ones, if you've got a second?"

The death stares from the other attendees make it clear: I just totally won this meeting, and I'm obviously awesome.

I use OmniFocus as more than just a to-do list. I tend to throw everything I think of into it, in the knowledge that it has a good chance of being bubbled up in front of me when I need it. Project ideas, sudden show-stopping issues that occur to me on the way home from the pub, whatever: I pull out my iPhone and make a note (or use Siri to set a reminder, something OmniFocus can pick up automatically).

OmniFocus's role as an Everything Bucket often seems to be overlooked by those looking for just a to do list. Which is fine. I'm a big believer that whatever system works for you, well, works for you.

For me, I like the idea that there's one place that all my tasks end up. I like that it's not my email inbox, and I like that it means that I have a quick answer when someone asks me if there's anything they can help with.

Contexts can be a tricky thing to get your head around when following GTD. The canonical examples all revolve around office environments that I don't recognise any more, things like Home, Office, Phone, Computer. Maybe someone will get creative and add "Email" in there too.

The point of contexts is to take your project-silo'd lists of tasks, but then switch them around so you can slice similar tasks across projects, pulling out, say, all the phone calls you need to make into a single list. The theory being that, when you're in "phone mode", you'll get through five phone calls in a row far faster than if you tackled each as you go through each project's task list.

The problem is that, for a life like mine, 90% of the things I need to do probably fall into the Computer context. I'm always in computer mode, which means that it's about as useful a slice as "Awake".

I'm not the first person to wonder aloud about how contexts can help a computer-based workflow. In many cases, people use contexts like "meta projects", or just eschew them altogether.

What I tried to do, though, was try to figure out a tighter definition for "context" that still accommodated the original "mode" idea.

The key question I ask myself when assigning a context is "what can I not do this without?"

Let's say my task is "buy Sugru". It's in my chores project (nothing yet depends on me owning this stuff, so it's a standalone task). What's the context?

I could say "Errands".

Aside: Trust me when I say this is a super powerful context. Gone are the days of being out in town shopping, convinced there was seething else you meant to get, and not realising till later, at the worst moment possible, that you're out of loo roll.

But where locally sells Sugru? I'll have to find out, which means this turns into a project since it now has two tasks: find out where sells it, then go and buy it.

Now, there's nothing wrong with that, but I just want some bloody Sugru. I could do it right now if I had my credit card. Actually, Amazon has my credit card details. I could…

I add Sugru to my Amazon context, and in so doing I notice I have three other things in there, so off we go to Amazon and that's three things off my list.

Now, you could end up with loads of contexts if you follow this pattern, but that's okay. In actual fact, I have hundreds of the damn things, and not just because I have a context for just about every person I interact with. Seriously, it's how I ninja'd that meeting: I had a context for my colleague and had been collecting "things to ask" over the course of a couple of weeks.

Don't look at me like that: this is what happens when you go on holiday without briefing me, people.

But how on earth do I manage hundreds of contexts? The long answer is another article, but the quick answer is that I don't. I let OmniFocus do it for me.

The latest version of the software introduced a great new feature: the open menu. Hit ⌘-O (yup, the standard open shortcut) and you get this:

If you're familiar with LaunchBar or Spotlight, you know how to use this. It's a smart search box that will jump you to tasks, projects or contexts. So tap ⌘-O, start typing the person's name… 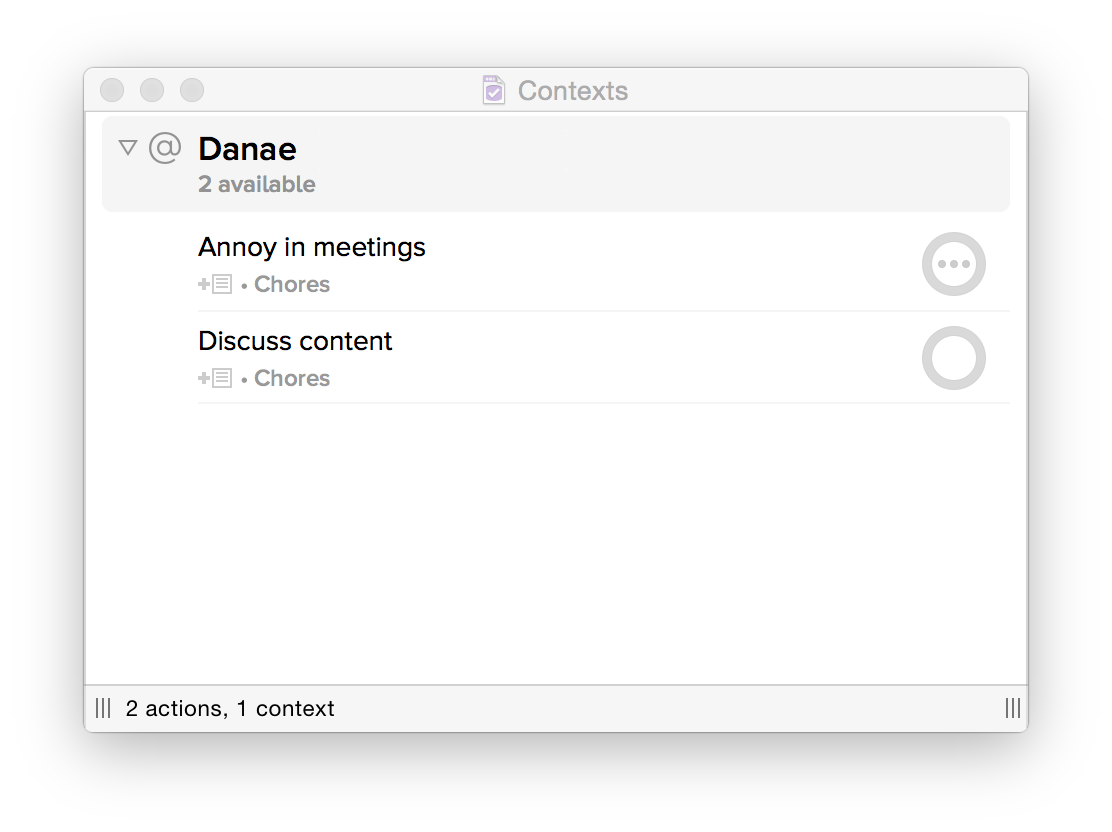 You know and I know that being this efficient makes you wildly awesome, but not everyone might agree. Especially if their meetings get extended every time you sit in.

Remember: the real ninjas don't go to the meeting in the first place.